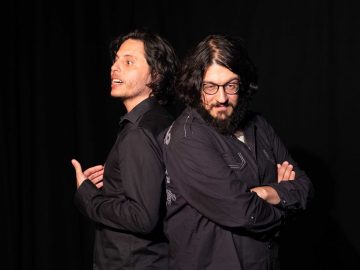 Storyteller Raphael Rodan from Israel and Dutch Iranian storyteller Sahand Sahebdivani combine classical Jewish and Iranian tales as well as their own personal stories, aiming to discover what home means to them and to see if they are really so different as the press, politicians and the public opinion make us believe.

In a poetic, strong and urgent performance they mix words with music, telling a new story about friendship and animosity.

was born in the ancient land of the Galilee in Israel. A land full of ancient stories. Stories of war, separation and the demonization of the other. My aim as a teacher, workshop leader and performer is to investigate how these stories can be transformed. Perhaps be used for the opposite, namely to challenge the place in us which categories the „other“ and ourselves. He graduated on 2008 from the School of Speech and Drama in Harduf, Israel and then continued to study at the School of Storytelling in Sussex, UK and completed his Actor training at the Actors Temple in London. In Israel, he used to work as a theatre director for Arab and Jewish young actors, using theatre as a bridge of communication. He runs storytelling workshops and performs all over the Kontinent.

was born in Tehran in 1980 to a family of impoverished nobility, generals, opium smuggles and mystics. He escaped the Ayatollahs at the age of three when his family fled to Amsterdam. Like all good Iranian parents his own wanted him to become a doctor. He surprised his parents and probably saved the lives of future patients by becoming a storyteller instead. He studied storytelling, screenplay writing and music. For the past decade he runs the most popular storytelling center of the Netherlands, hosting nights in Dutch and English. The Dutch storytelling society nominated him national storyteller of the year in 2012 and 2013. Since 2012 he’s started taking his energetic style of storytelling to international stages, performing in the UK, Germany, Hungary and Turkey.

Together with Farnoosh Farnia, Sahand Sahebdivani and Raphael Rodan had established the Mezrab Storytelling School. A school that is striving to link the ancient art of storytelling with today’s burning questions. Can the art of storytelling become more then just a form of entertainment? Can it raise fundamental questions such as „who am I?“ And relate to current world affairs?

Any cookies that may not be particularly necessary for the website to function and is used specifically to collect user personal data via analytics, ads, other embedded contents are termed as non-necessary cookies. It is mandatory to procure user consent prior to running these cookies on your website.